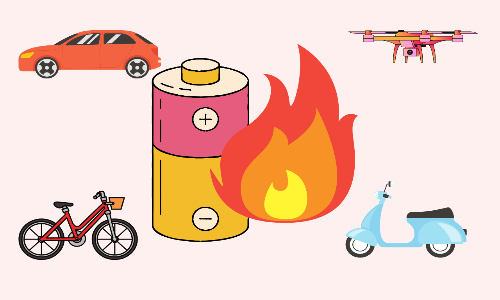 Why do electric vehicles catch fire?

Electric vehicles (EVs) are becoming increasingly popular across the world. While the risks associated with conventional vehicles are well-defined and generally accepted by society, time and education are needed to achieve this comfort level for Li-ion battery-powered vehicles.If Li-ion batteries are damaged there is a significant risk of electric vehicles catching fire. Even after the fire is extinguished, there are chances of re-ignition[1]. Apart from firefighters, these factors have to be taken into account by those handling damaged EVs for example during towing, scrapyard or workshop. Currently, Li-ion batteries are the preferred choice for electric vehicles. Their unrivalled characteristics, such as long cycle life, high energy density, and improved efficiency, make them ideal for automotive applications.

As more Li-ion battery-powered vehicles become operational across the world, their involvement in mishaps is anticipated to climb. As with conventionally powered vehicles, the energy stored on board has the potential to pose a threat to the safety of individuals involved in an accident. The safety concerns with Li-ion batteries have gained attention as a result of videos and press stories showing fire and smoke coming out of phones, computers, and hoverboards while being used or during charge.

The safety solution for battery packs will be discussed in the next article. Stay tuned!

To download the Specs sheet, please enter your email